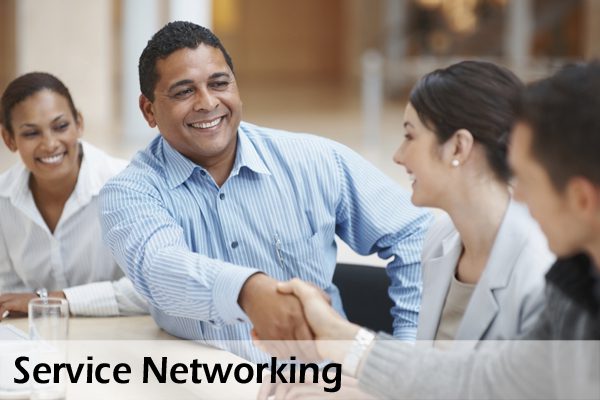 Think back to your last job search. What did you do first? Looked for listings online or in the newspaper? Responding to posted jobs is easily the most common job-search strategy, but is it effective? Not very. According to Richard Bolles, bestselling author of What Color is Your Parachute?, it pays off about 1% of the time.

Ironically, job seekers rarely use the most effective method—one that works 86% of the time. It’s what Bolles calls the creative approach to job hunting: do research about yourself, your skills, and organizations in your field, then use personal contacts to find the people within organizations who have the power to hire you.

That sounds great in theory, but how does it work in real life? How do you make valuable personal connections in the first place? Through “service networking.”

I first heard about service networking (connecting by serving) last summer from Andy Cusick, who is now a career development officer with the UW-Madison Office of Postdoctoral Studies. When I met Andy, he was looking for a position at UW-Madison after relocating.

Andy began his search by looking for LinkedIn contacts who might have connections at UW. He contacted a former classmate, and she gave him a list of people, which included me. He reached out, suggested meeting for coffee, then offered to speak at a job search group I organize.

Andy connected with other campus staff, offering to volunteer his time and expertise in career development. He later asked the people he helped to be references, which gave him a significant leg up in the interviewing process.

“Service Networking grew from the career development philosophy of ‘planned happenstance,’ the idea that one can intentionally position oneself in situations where good career outcomes are more likely to happen,” Andy says. “By offering to help someone I respect, I intentionally put myself in a place where something good might happen to me.”

How to Make it Work for You

If you want to make service networking work for you, try out these tips for success:

Connecting to others can be a daunting prospect, but when you see networking as relationship building through service, it becomes meaningful to all involved.

April McHugh is a career and educational counselor for the Division of Continuing Studies at the University of Wisconsin-Madison. McHugh helps adults with career transitions and continuing education through individual sessions and workshops. Contact her at amchugh@dcs.wisc.edu.

This piece originally appeared in the Wisconsin State Journal on June 14, 2015.