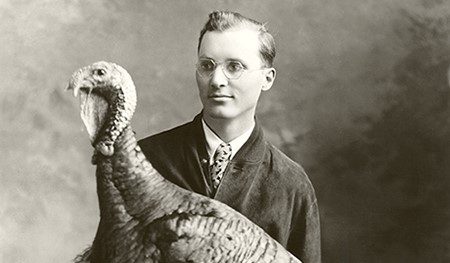 More than 100 years ago, the University of Wisconsin-Madison created what is now the Farm & Industry Short Course (FISC). In its current form, FISC is a 16-week program where students can tailor their curriculum to learn how to operate their own farms, run an agricultural business, or work in the agribusiness sector.

Back in the 1920s, FISC propelled the career of Wallace Jerome. If his name isn’t familiar, his company is: Jennie-O Turkey brands, found in stores across America.

A native of Spooner, Wisconsin, Jerome was always interested in eggs. In particular, he liked watching turkey eggs hatch. Between his 14th birthday and the time he completed high school in 1928, he had hatched a flock of 200 turkeys.

Jerome then came to UW-Madison as a FISC student. Upon completing his certificate, he became an egg inspector for the state’s Department of Agriculture. That egg interest hatched into an idea: that there was a lot of money to be made in turkeys.

The birth of the Turkey Store

He returned to college in the late 1930s, and he graduated from the University of Wisconsin with a degree in poultry husbandry. At the height of the Great Depression, Jerome purchased an abandoned pea cannery in Barron, Wisconsin, and turned it into a processing plant for turkey meat.

Thanks in part to his time as a FISC student, Jerome ultimately built his company into a powerhouse that employed more than 2,500 people.

Do you have an idea for an agricultural innovation that could help feed the world? The Farm & Industry Short Course can set you up to succeed. For information or to apply, see the program webpage.