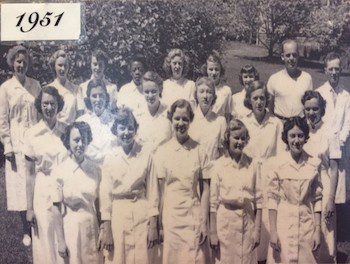 More than 100 years ago, the field of occupational therapy emerged in the U.S. to support the health and well-being of World War I veterans and people with mental health conditions. The University of Wisconsin–Madison’s Occupational Therapy (OT) Program was founded in 1943.

“There were very few practitioners and the field was growing very slowly,” said Caroline Thompson, the university’s occupational therapy program director from 1945 to 1976, in a 1996 interview.  “Very few people knew of OT. There were only five or six training programs in the United States.”

Most recently, in 2016, UW–Madison continued the tradition of innovation with its Doctor of Occupational Therapy (OTD), enabling practitioners to advance their careers through a part-time, predominantly online curriculum. The OTD program is designed to train occupational therapists to become visionary leaders who will help transform the nation’s health and education systems, as well as address the needs of an aging society.

In the early years of occupational therapy at UW–Madison, academic courses prepared students to work in mental health, tuberculosis care, general medicine, pediatrics, and orthopedics. The School of Education and the medical school jointly administrated the program, which was dedicated to rigorous academic standards and evidence-based practices and interventions.

“I think the doctors were the ones who saw that patients needed more than drugs and exercise,” said Thompson. “They saw we were producing results. And as doctors worked with occupational therapists to reduce patient recovery times, insurance companies took notice. Once the funding was there, the field really started to grow.”

Today, UW–Madison’s occupational therapy program is housed in the School of Education’s Department of Kinesiology and regarded as one of the best in the U.S., but the program had humble beginnings.

After World War II, UW–Madison’s enrollment nearly doubled due to the wave of returning veterans. By the mid-1950s, the occupational therapy program was the second largest in the country with an enrollment of 150 students, but it was housed in a temporary facility.

“As students of that era will remember, the temporary facilities were uncomfortably hot in the summer, icy in the winter and were infested with mice,” said Alice Punwar, who earned her undergraduate degree in occupational therapy from UW–Madison in 1954. “Miss Thompson was in the habit of draping a raincoat over her filing cabinet before she left her office each day so that the student files wouldn’t get wet if it rained.”

Punwar, who returned to campus in 1969 as an occupational therapy faculty member, said that renowned instructors came from all over campus, including the medical school, the anatomy department, and the art department.

In an effort to maintain high quality and better meet the needs of students, the occupational therapy program required minimum standards for admission beginning in the 1970s. In 1985, the program launched a post-professional master’s degree in therapeutic science to serve the advanced learning and career needs of occupational or physical therapists. In 1996, as federal funding agencies began recognizing the field, the Ph.D. in kinesiology, therapeutic science track (now occupational science track), was established.

In 2005, UW–Madison launched its professional master’s degree in occupational therapy, with an emphasis on research and critical thinking skills. Two years ago, the Doctor of Occupational Therapy program made its debut.

Today, UW–Madison occupational therapy faculty and staff lead a research enterprise of more than $8 million in federal grants over the past five years. U.S. News and World Report ranked the program 14th in the nation in 2016.

“Our professional occupational therapy program is one of the oldest and most successful in the United States,” said Ruth Benedict, professor and director of the OT program. “This program enjoyed a great deal of success in its first 75 years, and we are excited to build from that strong foundation to bolster the university’s tradition of excellence and educate occupational therapists who will promote the health and well-being of our state, our nation, and the global community for years to come.”